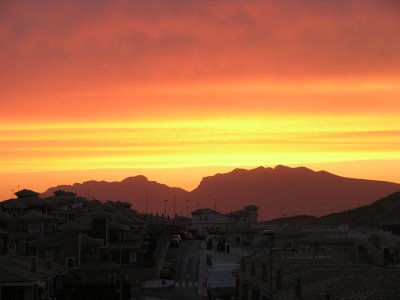 Yesterday we had this spectacular sunset. I'll let you know if the rhyme we learnt as children is true.

Speaking of seeing red.... There was a meeting last night at the Pedrera called by the Villas Andrea Residents' Association. It appears there have been more shenanigans with someone sending the Chairman an anonymous letter. One of the committee members read the letter out and it seemed to us that there were some very good points raised in it. Those got lost though when the Chairman made a statement saying he had had enough. We weren't quite sure whether that meant he was resigning. It didn't matter though because a huge wave of sympathy swept over the meeting and he ended up being convinced to carry on. All very dramatic and a total waste of our time.

By the time we had walked back and chatted to several people on the way it was past 9pm and we hadn't eaten. We are told that Spanish people don't eat their evening meal until 10pm or later. I just don't know how they survive - we were darned hungry.
Posted by Bigastroandbeyond at 8:33 am