Go and see for yourselves 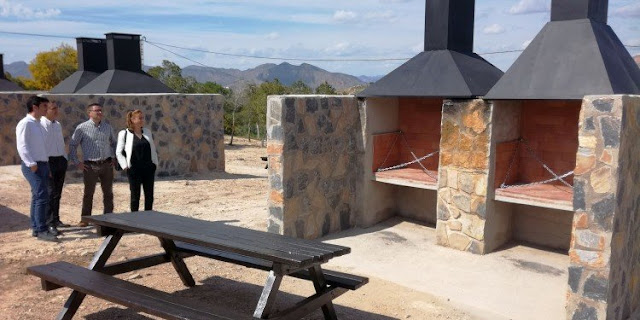 Bigastro Town Hall has managed to recover the state and image of the recreational area of ​​La Pedrera, one of the most visited natural sites in the Vega Baja region. Thanks to a grant from the Environment Department of the Provincial Council, new services have been installed, after carrying out necessary maintenance work. This is the first step to create an environmental route that unites the mountain of the municipality and the traditional orchard.

The rehabilitation has been carried out in recent months and has consisted of three different stages: the improvement of the pergola and shade, the children's play area as well as the barbecues and public toilets. In total, the project budget has meant an investment of more than 60,000 euros.

The pergola has received various treatments of varnishes and they have replaced the damaged wood. It should be remembered that this recreational area has hardly received any work on it since it opened in the nineties. For that reason, the pillars and beams that support the wooden structures have been reinforced, as well as the new walkways that have been created. The rails have also been reinforced and the most damaged ones have been replaced.

With regard to the children's play area, the old children's games have been removed because they do not comply with safety regulations. The City Council will be installing  new games in order to expand the leisure area for the youngest.

Another necessary action was the replacement of the toilets that had remained in disuse because of the damage. They have also been adapted for people with disabilities. The company awarded the work has carried out an extensive cleaning of the graffiti in the recreation area and has completely reformed the barbecues, which now have fireproof materials and security systems to prevent sparks from burning. These improvements have been made to adapt the barbecues to the current regulations on fire protection.

With all this, La Pedera is now ready to receive the large group of visitors that visit throughout the year including school groups organised by educational centres throughout the Alicante province  and the neighbouring Region of Murcia. This recreational area has an enviable location and it is one of the few spaces in the region with picnic tables for outdoor activities.
Posted by Keith Willliamson at 4:39 pm Labels: local news