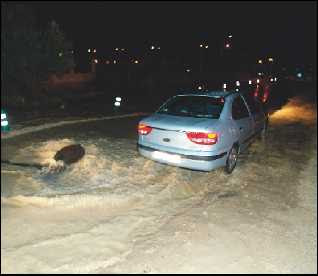 Between 9 and 10pm last night 50 litres per square metre of rain fell on the Alicante area causing chaos. Roads were flooded, electricity was cut and police and fire services struggled to cope with the number of calls they received.

In Alicante, roads were closed to traffic, part a building collapsed and patients had to be moved in both the hospitals as parts of the buildings suffered leaking roofs.

The storm, which had developed over the Gulf of Cadiz, was caused by a polar air pocket colliding with the humid westerly wind.

The forecast is for the storm to continue but gradually abate during the day. As I write this, I can hear the thunder still rolling overhead, the skies are dark but it isn't raining at the moment.

Posted by Bigastroandbeyond at 8:59 am Labels: local news