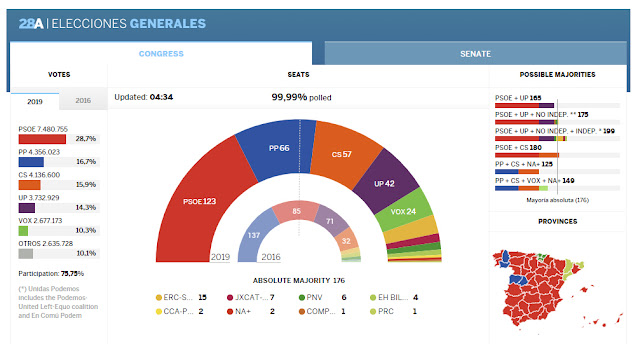 As predicted,  the Socialist Party (PSOE)  won the highest number of seats but still fell short of an absolute majority. With around 95% of the vote counted, the PSOE has 123 seats while Unidas Podemos – a coalition of United Left and anti-austerity group Podemos – picked up 42. Together, these two parties account for 165 seats, which is still below the 176 needed for an absolute majority, meaning Pedro Sánchez will need the support of regional parties if he is to govern.

The conservative Popular Party (PP) suffered a crushing defeat, losing around 70 seats in Congress to be left with just 66. The centre-right party Ciudadanos (Citizens) performed better, winning 57 deputies in Congress. Meanwhile the far-right party Vox took 24 seats in its debut national election. Since Blas Piñar, a far-right politician linked to former dictator Francisco Franco, lost his seat in Congress in 1982, no political party with a similar ideology has set foot in any of the country’s parliaments.

The change in the Senate looks even more drastic: Whilst the PSOE increased their number from 43 to 121, the PP dropped from 130 to 56. 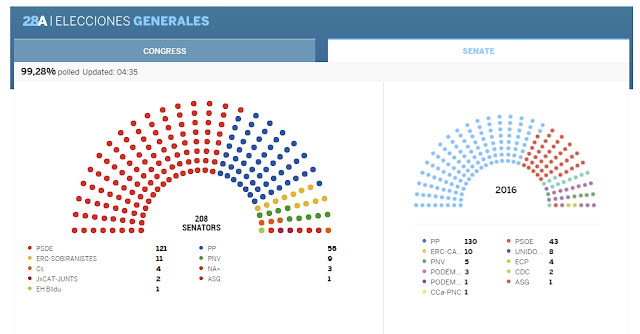 Voter turnout was around 75% – 8.5 percentage points more than the 2016 polls. In Bigastro, the turnout was even better at over 80% according to the data collected.

In the Vega Baja the towns were mainly split between PSOE and PP.

The PSOE and the PP won in 13 municipalities of the region each, leaving Ciudadanos the majority in the town of Daya Vieja. 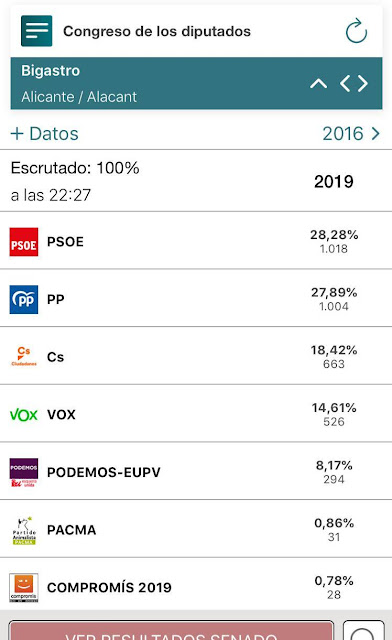 Posted by Keith Willliamson at 9:20 am Labels: local news