Yesterday, my daughter Jemma went on strike. She was the only teacher from her school to do so even though there were other staff in the NEU at her school.

Why did it come to this?

The Institute for Fiscal Studies have calculated that long-serving and senior teachers – accounting for nearly a third of those working in England – would have earned the equivalent of £50,300 in 2010. But below-inflation wage increases over the past 12 years has meant their pay in 2022 was just £43,700.

Experienced teachers have experienced similar real-terms cuts across the national pay scale, meaning that half of the teaching workforce has had the value of their annual earnings fall by thousands of pounds compared with what they would have earned in 2010, when the Conservative party came into government.

By contrast, average earnings across the whole economy are thought to have increased by about 2% in real terms during the same period. MPs, for example, earn £18,306 more per year than they did in 2010.

Dwindling pay is one of the main reasons for the government is missing recruitment targets, and why it faces shortages in specialist subjects such as physics, which are forcing schools to rely on non-specialists to plug gaps in classrooms.

It is a fact that nearly a third of teachers  leave the profession within five years of qualifying.

So the issues the government faces are recruitment and retention.

Did they want to go on strike? Definitely not! My daughter has already lost a day's pay and stands to lose three more days pay if the impasse is not resolved.

PS She is right behind the bloke in the brown jacket and the one with a bald head - centre right of the photo. 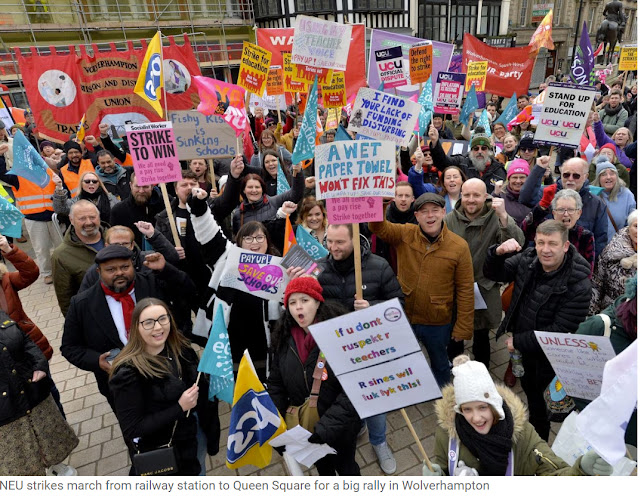 Posted by Bigastroandbeyond at 2:29 pm
0 comments

A date for the diary 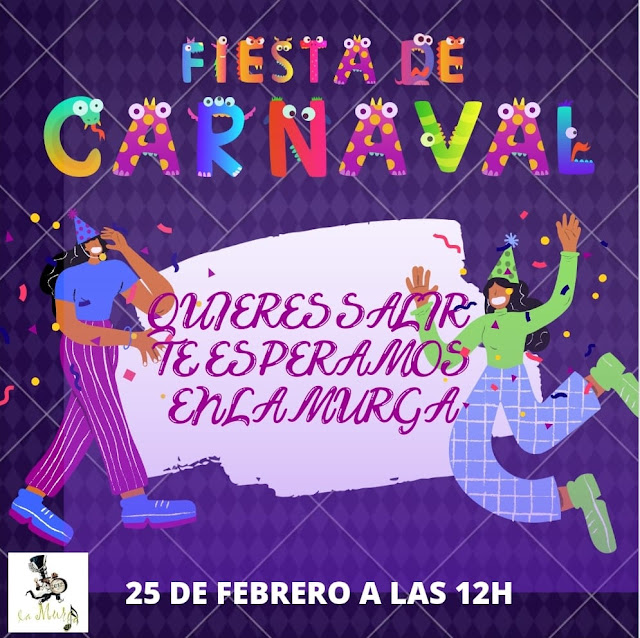 Posted by Bigastroandbeyond at 12:49 pm
0 comments

More work in the town

On Thursday works began at the Centro Social Integrado.

These include, improvement works on the energy efficiency of the building, work on the whole of the roof, laying new waterproofing and insulation as well as improvements to the skylight woodwork.

With an investment of more than €60,000 thanks to the Deputation of Alicante, the work will last approximately 1 month and will not effect the activities that take place inside.

However, it will  mean there will be limitations on parking in the surroundings, due to the need for the use of cranes.

Posted by Bigastroandbeyond at 10:32 am
0 comments

In a country and an area where temperatures rarely get so low, the Town Hall has seen fit to post some helpful tips on how to survive the current freeze. 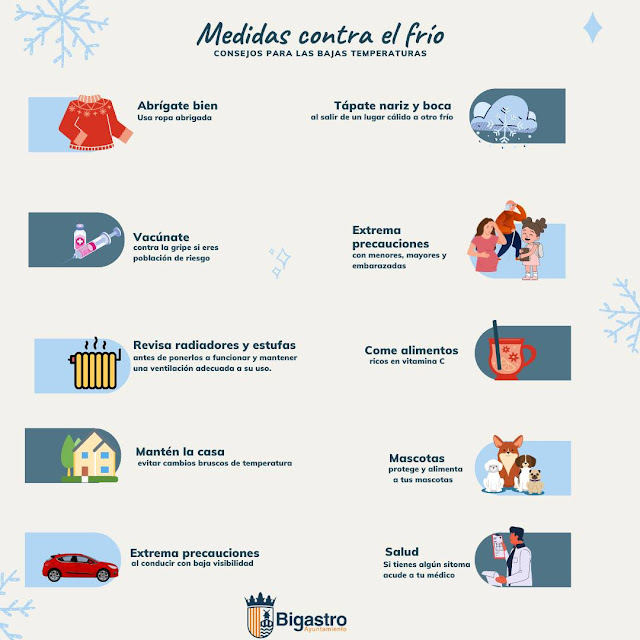 Posted by Bigastroandbeyond at 2:03 pm
0 comments

Local elections are scheduled for May. In preparation for them, political parties will be drawing up manifestos designed to attract voters.

I have the greatest admiration for the achievements of our current Town Council who have worked hard to improve the town for its citizens. They will surely get my vote in May.

Many of the latest projects of the current administration have been aimed at making Bigastro attractive to visitors. In a conversation Pam and I had with the Mayor, she expressed a wish to develop the town as a tourist destination. I therefore assume that tourism will feature as part of the Partido Populares manifesto for the upcoming election.

I understand that it is difficult to achieve a balance between preserving the traditional nature of the town with the 21st Century needs of the people because the two aims are not necessarily compatible.

However, in my experience, towns that are attractive to tourists manage to combine modern facilities with places of historic interest.

There are, in my opinion, several issues that Bigastro could perhaps address to move it forward make it more attractive to both locals and visitors alike.

1. The main shopping street currently has at least 12 vacant premises. My impression is that, in the eighteen years I have lived here, there has been a steady decline. I do feel that the commercial hub is now in need of urgent regeneration.

2. As far as I can tell, there are no places of historic interest nor any places that celebrate the culture of the town. As an example, nearby Rojales has several museums such as the Museo de la Huerta to attract visitors. I believe that Bigastro would benefit from something similar.

3. Although there are plenty of bars, most of which sell food, there are few places that could be regarded as restaurants celebrating local produce and serving traditional local dishes.

4. Parts of the town are run down and untidy. For example, the billboards at the top of the Plaza de la Constitucion are an eyesore. The town squares in e.g. Benejuzar and even Jacarilla are more attractive and perhaps set an example for Bigastro to follow.

5. Facilities that have been developed need to be maintained. As an example, I  notice that some of the information boards for the Ruta Alquibla are now in a state of disrepair. Whilst it is important to develop new projects, it is also necessary to consolidate existing ones.

Posted by Bigastroandbeyond at 1:57 pm
0 comments

In England, a forecast for snow brings the prospect of misery to most adults. Children may get excited but their parents view the likelihood of chaos on roads, delays or cancellations in public transport and even the closure of airports as not something to look forward to.

Here in the Vega Baja, few have seen snow in any quantity. They go out for day trips inland or to the Sierra Nevada to play and have fun in the snow. To local Spaniards it is a novelty not to be missed.

The weather at the moment here is cold, very cold, especially at night. There is also the possibility of some rain which might mean it could snow. This is getting forecasters and elements of the public excited.

Of course snow does transform the landscape and blankets out the imperfections of run down buildings. Too much though and those that are looking forward to a white blanket covering everywhere will soon change their minds. There are no snow ploughs nor depots stocked with grit. Admittedly there is plenty of salt but that is earmarked for Northern Europe.

Those who have endured hazardous journeys on snow covered roads, who have been cut of for days from essential supplies, trudged for hours through ankle deep snow to get to work or waited hours for a bus that doesn't arrive would prefer a return to normal Spanish weather. 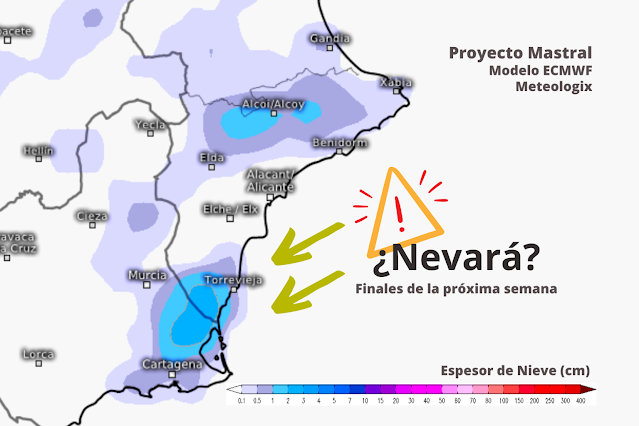 Posted by Bigastroandbeyond at 11:48 am
0 comments

Who on earth said that we don't need the winter fuel allowance here in Spain? Just look at the temperatures for next week. Twenty degrees in the daytime is bad enough. When it drops to 13 and 0 at night, then it is damn cold. 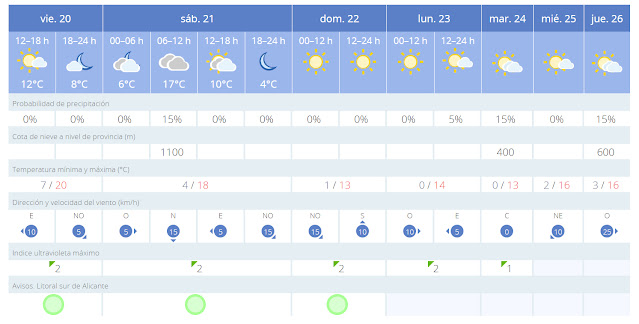 Was it really way back in February 2019, almost four years ago,  that the Lady Mayor first lead a party of bigastrense around the Ruta Alquibla? This was a major project designed to attract tourists to the town.

All along the routes there are information boards that describe the significance of your location.  Upon completion of the walk, you will have learnt an awful lot about the history of the town, the ecology of the area, the agricultural significance of the Vega Baja  and some of the traditions of Bigastro.

The Mayor, her second in command and the Councillor for Culture are currently at the FITUR exhibition in Madrid continuing to promote the town as a tourist destination.

For this year, the theme is the traditional crafts of the town which they explain are in danger of being forgotten.

In order to keep them alive, at least in people's memories, they are presenting the  new cultural and sports tourism project - the first "outdoor museum of traditional trades in the region of the Vega Baja"

It will be a 2 km long urban route that that will have 20 murals, designed by the local painter Olga Navarro, depicting trades that were local to the region. Here is a taster to whet your appetite. 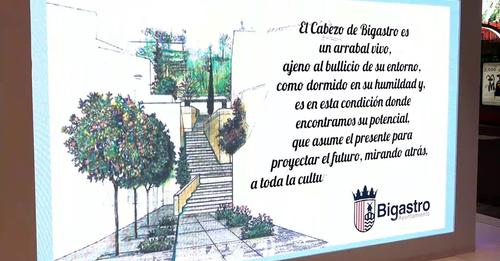 For teachers, strike action is very much a last resort – not something that they take lightly.

Now though, fed up with being fobbed off year after year, teachers have voted to take action this year. This is not just about pay, it is about funding for education that has been eroded over the years.  Schools increasingly have to depend upon PTAs to pay for essential resources. That's fine in areas where parents are well off but not so good in deprived areas.

Although NEU members will be striking for 7 days during February and March, individual schools will only be affected on 4 of them.

Unsurprisingly, Downing Street have called on the unions to call off any strike.

No 10 said that teachers should not strike and inflict "substantial damage" to children's education, especially after so many missed out on schooling during the pandemic.

Schools have been told they can use volunteers to stay open. I sincerely hope no headteacher is foolish enough to try and replace teachers with untrained and unvetted members of the public. I also hope that members of other unions do not volunteer to cover for their absent colleagues.

NAS/UWT = National Association of Schoolmasters and Union of Women Teachers.

Posted by Bigastroandbeyond at 10:29 am
0 comments