Posted by Bigastroandbeyond at 7:43 am
0 comments

The claim is that this is the first talent show in Bigastro. I'm not sure if that is strictly true. I recall one in the park some years back where, amongst others, our neighbour Manuel Robles took part and told jokes and funny stories. Even still, it should prove popular and well supported especially since there is 1,000 Euros at stake. It is scheduled to start at 11:30pm but you can take that with a pinch of salt - could be a late night!!! 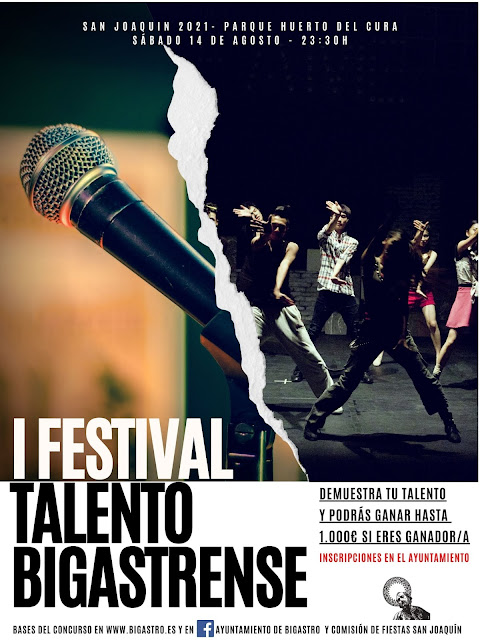 Posted by Bigastroandbeyond at 2:19 pm
0 comments

From Monday, there will be roadworks on Calle Mayor and Calle Moreal as indicated on this map. The blue arrows show the diversions that traffic should take. 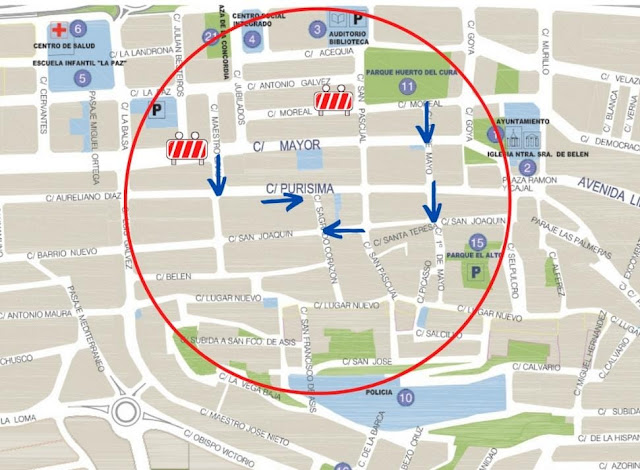 Posted by Bigastroandbeyond at 8:56 am
0 comments

The  DfE is encouraging schools across the UK to celebrate One Britain One Nation Day this Friday as part a long-running campaign founded by former police chief Kash Singh. It is trying to get schools on June 25 to 'encourage every child to clap for a minute to recognise, embrace and pay tribute to all those people who helped during the Covid 19 pandemic crisis' and sing the 'One Britain One Nation' anthem.

Posted by Bigastroandbeyond at 10:50 am
0 comments

With a flurry of intense activity, the Council created 20 allotments on the corner of Calles Alemania and Inglaterra. When we inquired about this, Pam and I were told that 11 people had shown interest in renting an allotment to grow produce on.

Since then, there has been no activity on the land and the weeds have taken over.

Speaking to one of my neighbours the other day, he said that he'd previously rented an allotment in England and had put his name down for one of the allotments here. His understanding was that there was an issue formalising a contract with the water company.

Clearly, nothing useful will grow on the allotments without a supply of water. By the time this is sorted out, they will need to clear the land again before planting any crops.

Posted by Bigastroandbeyond at 10:21 am
0 comments

The latest project is to  expand the Town Hall creating space for a Museum of Local History.
The  work, which also includes a balcony at the front of the building and extra offices, will be paid for with an investment from the Alicante Provincial Council of 100,000 euros.
I recall that the town used to have a museum in a building near to the sports centre dedicated to the horticultural connection of the town. There is also a classroom up at La Pedrera which I believe houses information about the fauna and flora of the area.
Let us hope that the new museum attracts more interest than the library which seems to be mainly used by a handful of pupils doing their homework in the evenings. 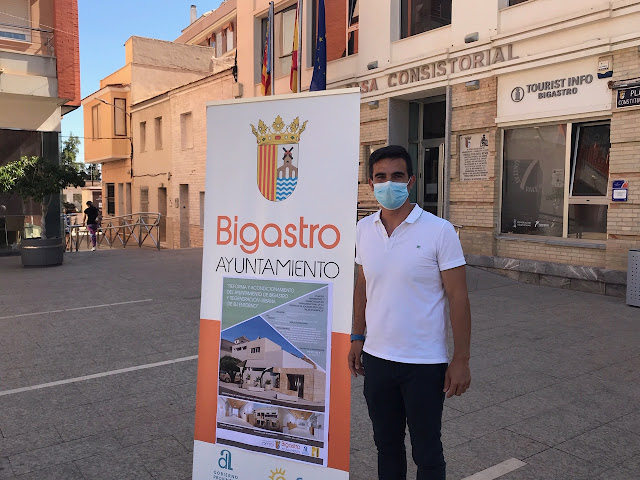 Posted by Bigastroandbeyond at 10:01 am
0 comments

It was great to be out in the fresh air, meet friends and listen to the band playing some good music.
You will find my photos from yesterday's concert in the park in the sidebar and here is my recording of the music.

Posted by Bigastroandbeyond at 9:40 am
0 comments

Just look at these pictures taken yesterday in Torrevieja and Guardamar del Segura. Have you ever seen clouds like these?
It didn't rain for long here in Bigastro but boy did it pile some brown dust on everything.

Posted by Bigastroandbeyond at 8:50 am
0 comments

The next phase of construction in Bigastro is on Calle Purisima (the main street of the town). Although it will still be pedestrianised, there will be 19 new parking spaces for people wanting to go to the shops, banks etc. 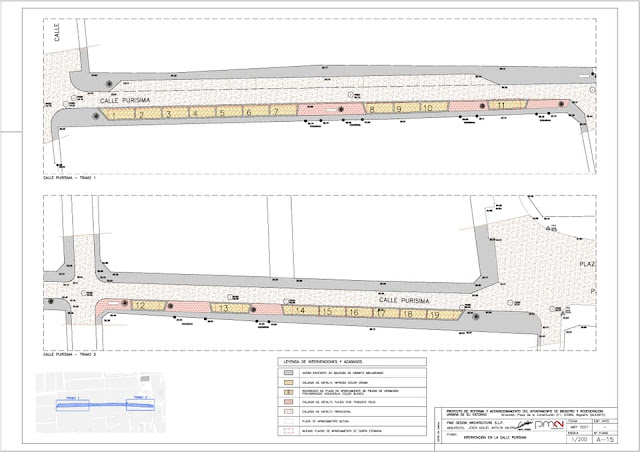 Posted by Bigastroandbeyond at 5:52 pm
0 comments

Changing the law regarding masks

The Prime Minister Pedro Sánchez says he is confident  that Spain will soon drop the use of face masks while outside.

He went on to claim that, in just a few weeks time, 50% of the population will have at least one dose of the vaccine.  A record 3.5 million vaccine doses were administered in Spain last week. From a slow start, Spain has caught up and made remarkable progress.

Spain currently has very strict mask rules in place, including their required use outdoors by everyone aged six and over even when social distancing can be observed.

I would say that the vast majority are compliant with that rule. However, we see a growing number of people in the street without a mask or with their mask below the nose. Whatever the law says, people are voting with their feet.

I believe it is time to make the change.

I noticed two elderly ladies taking their constitutional walk up to La Pedrera yesterday and both wore masks. For sure both of them had two doses of vaccine sometime ago and they were outside where there were no other people about. All the masks were doing was making their breathing and conversations more difficult. Things are of course different in towns and cities where people are crowded closer together and social distancing is impossible.

Posted by Bigastroandbeyond at 10:52 am
0 comments

The wind was quite strong yesterday morning but nothing notable. Suddenly though, it picked up and for half an hour or so it blew a hoolie. You can see the devastation this caused in the following photos.
The first three show a palm tree that collapsed on the Vista Alegre in Torrevieja. That last one is of a palm tree that came down in nearby Jacarilla. 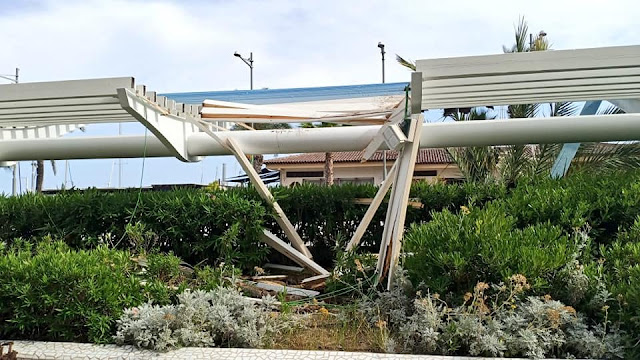 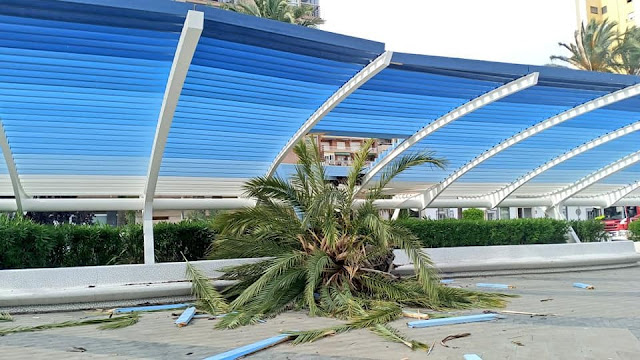 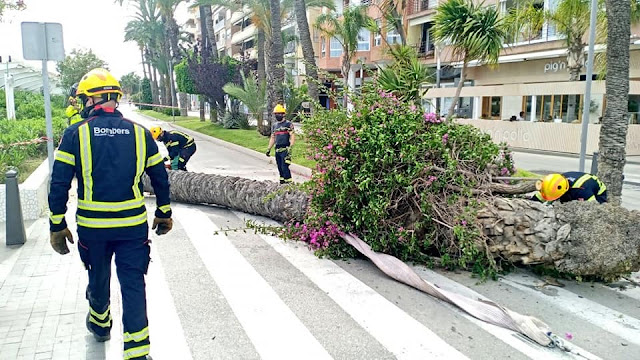 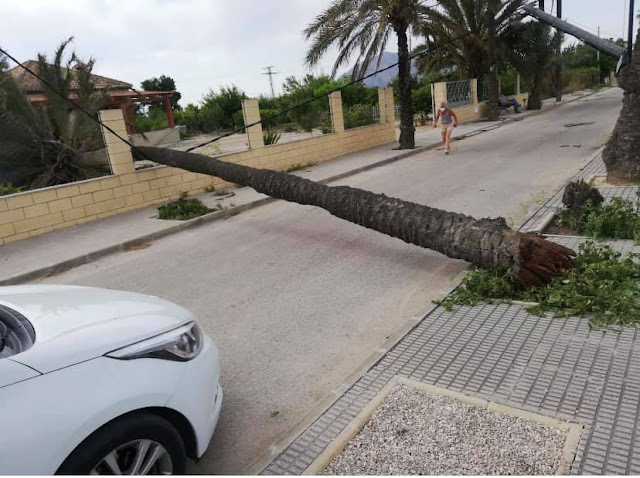 Posted by Bigastroandbeyond at 10:08 am
0 comments

How do avoid the itchy season 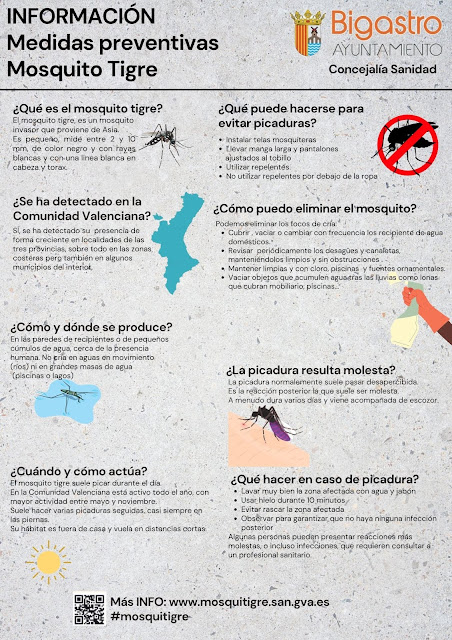 Posted by Bigastroandbeyond at 9:59 am
0 comments

Remember though, it is still compulsory to wear a mask in public places and in shops. I inadvertently walked into a supermarket yesterday without my mask and was reminded by an assistant to put it on. 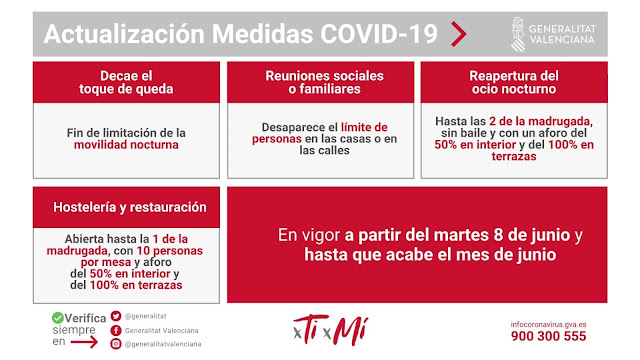 Posted by Bigastroandbeyond at 9:04 am
0 comments

Bigastro, the drug capital of Spain 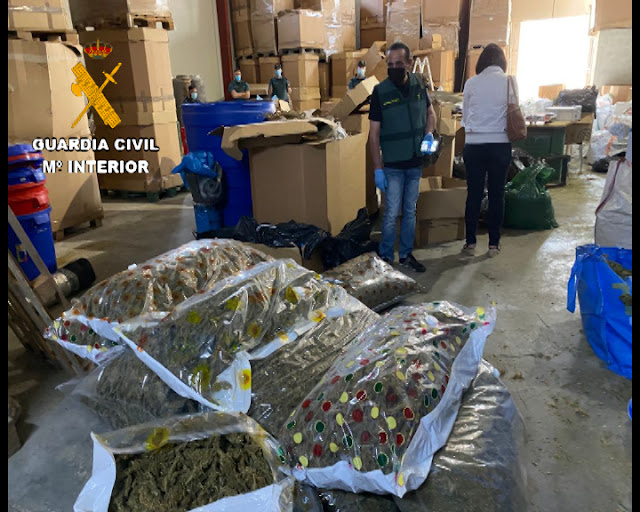 The Guardia Civil  have broken up a major hashish factory in Bigastro. Six people were arrested for drug production, trafficking and belonging to a criminal organisation.  A massive 8,300 kgms of  narcotic substances were seized.

Unbeknown to all, this was taking place in a factory unit in the town.

I think we can safely say this will not be on the list of selling points for the town as a tourist destination!!!

Posted by Bigastroandbeyond at 8:53 am
0 comments

On Friday, the lady Mayor, the Councillor for the Environment and the Councillor for Culture opened an exhibition in the entrance to the Auditorium entitled "The Limits of Growth"
Then on Sunday, Efren Pamies and Pascual Segura took a group of 20 up to the old Stone Quarry. 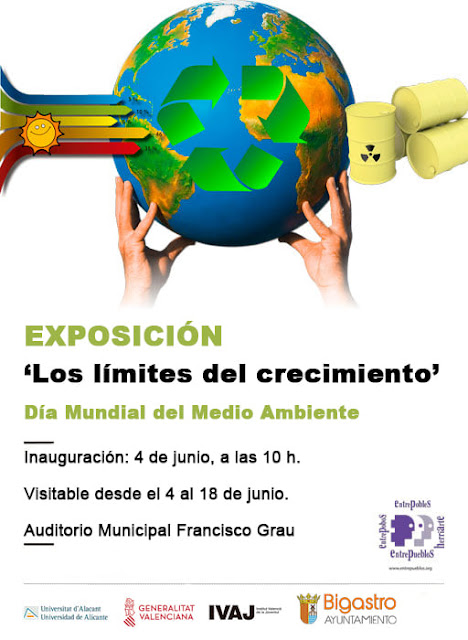 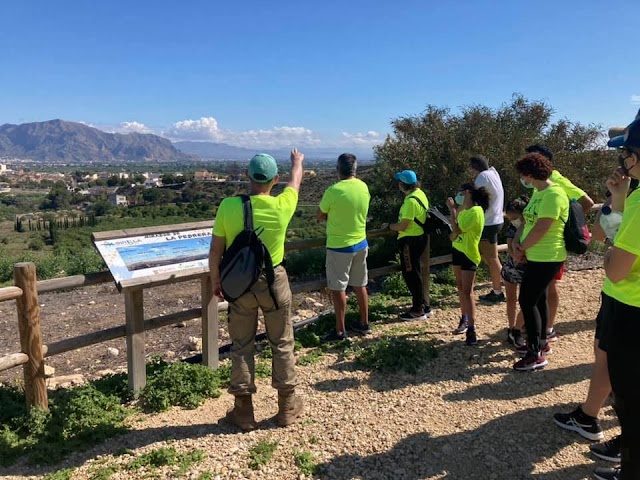 On Thursday and Friday of this week, there will be guided tours of the town's archives and then on Friday there will be an exhibition of some of the archival documents. 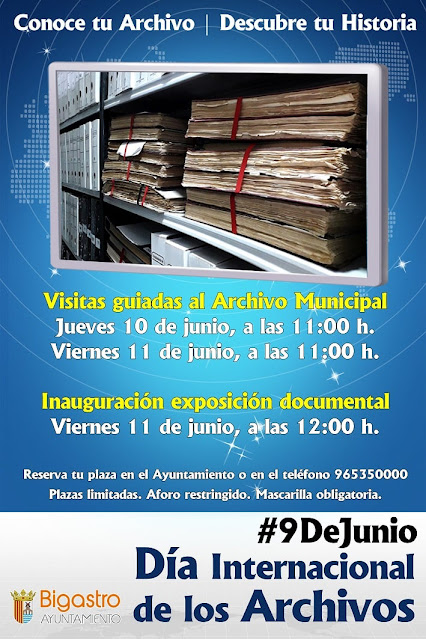 Posted by Bigastroandbeyond at 9:23 am
0 comments

Boris Johnson says, 'Vaccinating the world by the end of next year would be the single greatest feat in medical history.

'I'm calling on my fellow G7 leaders to join us to end to this terrible pandemic and pledge will we never allow the devastation wreaked by coronavirus to happen again.'

The Prime Minister is expected to call for a stepping up of the manufacture of vaccines, lowering barriers to the international distribution of jabs and sharing surplus doses with developing countries, both bilaterally and through Covax, a World Health Organisation scheme.

Joe Biden has already announced that the US will send 25 million doses overseas, three-quarters through the Covax aid programme and the rest directly to most-in-need countries.

Emmanuel Macron also said France would send 500,000 shots, with some already on their way to West Africa.

The UK has secured access to around 400 million jabs – far more than it is likely to need. So it surely must have more surplus vaccine to donate than a country like France.

It its defence, the UK argues it has provided global leadership, by funding the Oxford-AstraZeneca vaccine and making it available at cost – rather than at a much higher price, with huge profits made.

Health Secretary Matt Hancock last week said the UK would look to donate spare doses, in line with a Government pledge made in February, but added: 'At the moment we don't have any excess doses. We're just getting them into arms as quickly as possible.'

The vaccination success of  the UK has been attributed to the continued support for the Conservative Party. It has also lead the government to making promises of complete freedom from lockdown measures, possibly on the 21st June. However, the premise that nobody is safe until we are all safe still applies. That has been amply illustrated by the rapid spread of  the Delta variant in the UK. The UK will not be safe whilst new variants pop up in other parts of the world.

It is understandable that Hancock would want to vaccinate everyone in the UK before donating excess doses to the world but it is hardly a good example of statecraft and world leadership. It also doesn't tie in with the statements that his boss is making.

Is this going to be a classic case of 'do as I say not do as I do.'

Posted by Bigastroandbeyond at 11:03 am
0 comments

These are the chemists open 24 hours in June. 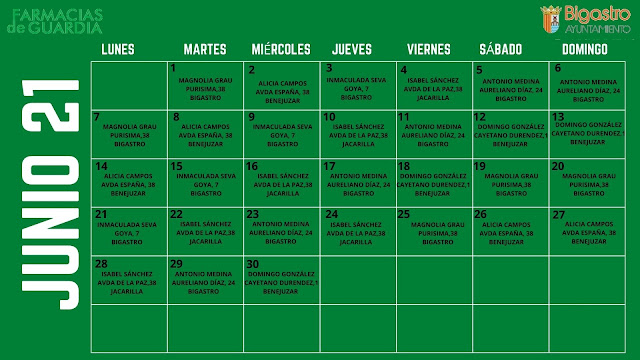 Posted by Bigastroandbeyond at 9:13 am
0 comments 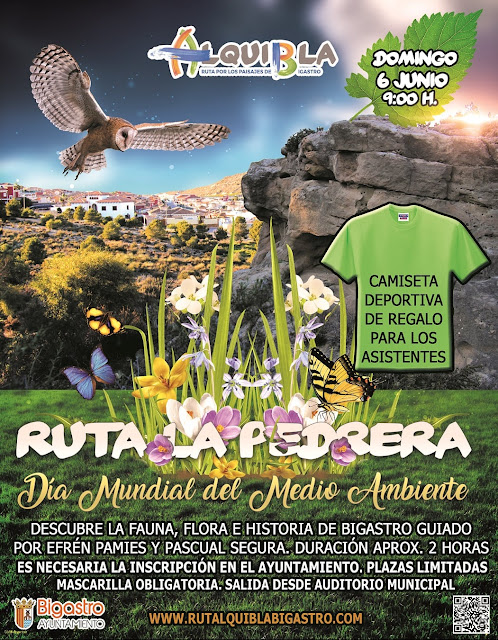 A two hour walk starting from the Auditorium this Sunday at 9am and it looks like it will be sunny and warm.

Efren Pamies will tell you about the fauna and flora en route and Pascual Segura will tell you some of the history of the town on the way.

Since places will be limited, you need to register at the Town Hall.

Posted by Bigastroandbeyond at 9:10 am
0 comments