The weather forecast indicated that there might be a few drops of rain this afternoon but that the procession tonight should not be affected.

Well, it is not quarter to six and there has been more than a few drops here in Bigastro. The forecast says that there may be strong gusts of wind with a yellow alert tomorrow. This does not bode well. 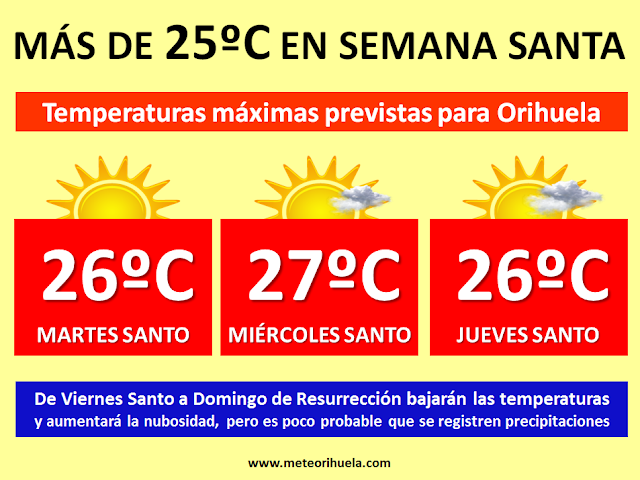 Those would be fabulous temperatures for a summer's day in England.
Posted by Keith Willliamson at 9:35 am Labels: local news
0 comments 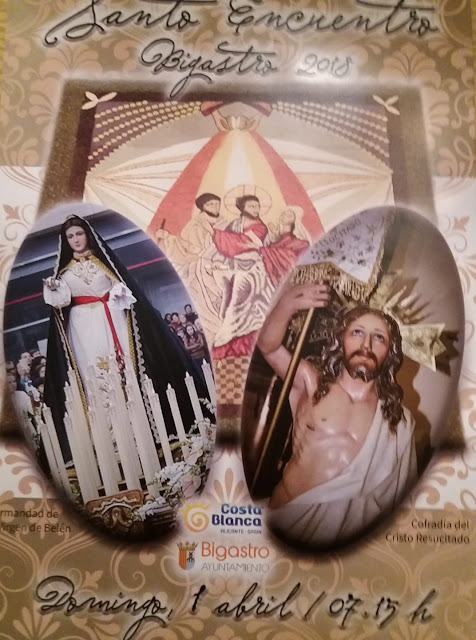 You'll need to be up early if you want to catch this.
Posted by Keith Willliamson at 8:19 am Labels: local news
0 comments 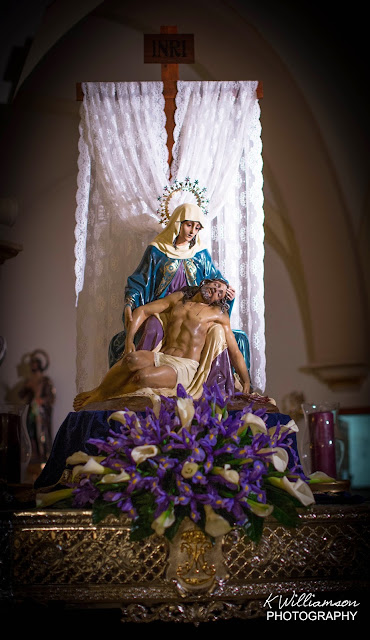 The weather Gods were kind last night for the people of Bigastro. It started to spit rain at about 9:30pm but nothing came of it. There was just a light breeze that did nothing more than blow the oil lamps out that people were carrying.

As I said though, there is very little light once the street lights have been turned off. In the calles it was just light from the odd window that illuminated the passage of the procession.

First out of the church was the statue of Jesus on a small throne that was pushed along.

The statue of Mary, holding Jesus from the cross, was carried on the shoulders of ladies from the brotherhood. You sense her pain as Mary sits with the lifeless body of her son on her lap.

This year, the procession was accompanied by the Manuel Moya Choir and the procession stopped at various points for readings from the Bible.
Posted by Keith Willliamson at 9:53 am Labels: local news
0 comments

All was calm until 6am. The wind had actually died down overnight but that was not going to last.

Looking at the data, the wind suddenly picked up and gusts of up to 90kmph were being recorded. According to AEMET we are on orange alert for wind until 6pm tonight. It then drops to yellow alert until midnight. Although much of Spain is affected, it is the South East that is bearing the brunt of the wind.

On a positive note, all looks well for Palm Sunday.
Posted by Keith Willliamson at 9:14 am Labels: local news
0 comments 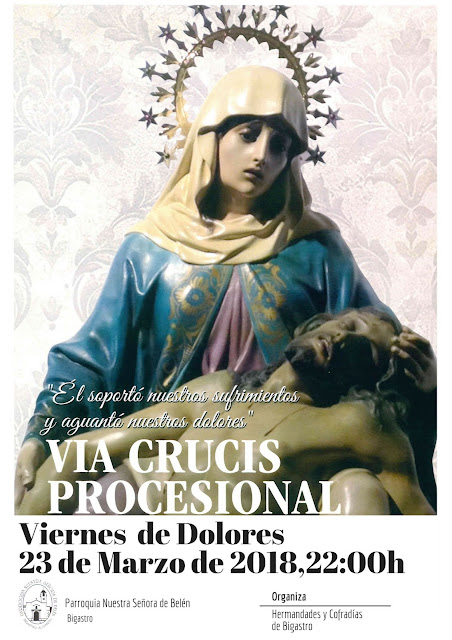 We've been to this parade a couple of times now.

With the street lights out and just oil lamps for illumination, this is one of the most moving parades we have witnessed.

Very difficult to photograph though with so little light and of course flash would be out of the question.
Posted by Keith Willliamson at 7:28 pm Labels: local news
0 comments

More about the Certamen

The band competition that Bigastro is participating in is divided into sections according to the number of musicians.

Bigastro competes in the popular 2nd sections which is for bands between 51 and 70 in number. Bands are allowed to recruit up to 5 musicians who do not normally play in the band but these must not be playing with the other bands from that section.

Each band will play three pieces including a work of free choice which must have a maximum duration of 22 and a minimum of 12 minutes. The set piece for the 2nd Section is Pumpkins by Juan Gonzalo Gómez Deval.

The members of the jury will each score points out of ten for each piece played  and then prizes will be awarded as follows:

All the bands participating in the second section are awarded 4,200 euros to cover expenses including transport.

In addition,  the band that earns the honourable mention will be awarded the prize of 2,500 euros.
Posted by Keith Willliamson at 10:22 am Labels: local news
0 comments

The all important weather 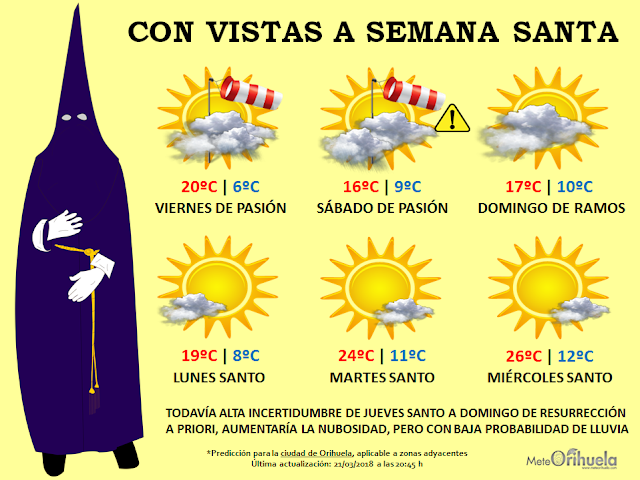 We always live in hope that Holy Week will be dry for the processions. It seems that we may be lucky this year. Not fussed about the probability of strong wind on Saturday though.
Posted by Keith Willliamson at 8:36 am Labels: local news
0 comments

Well you already knew that because I've posted an album of pictures taken at the Gala on Sunday night.

Here you have further proof with a picture taken by our friend Fonta. 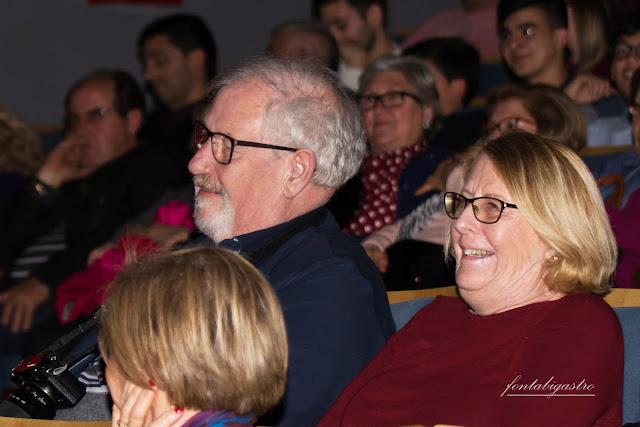 Posted by Keith Willliamson at 8:32 am Labels: local news
0 comments 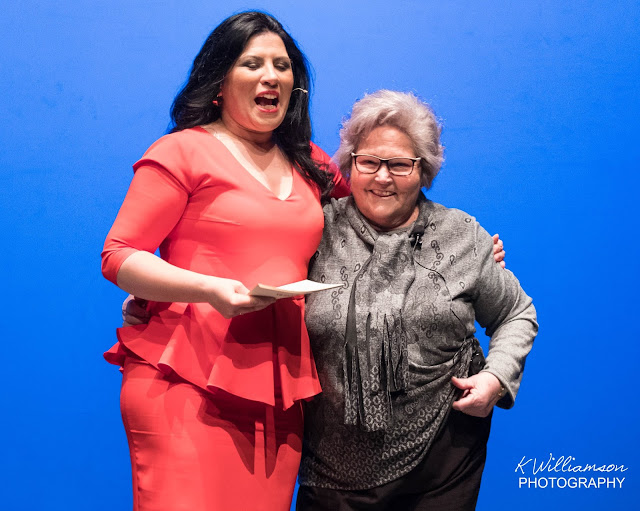 Such a wonderful lady and a great ambassador for relations between the Spaniards and the Brits.
Posted by Keith Willliamson at 12:13 pm Labels: local news
0 comments

For all you dads out there 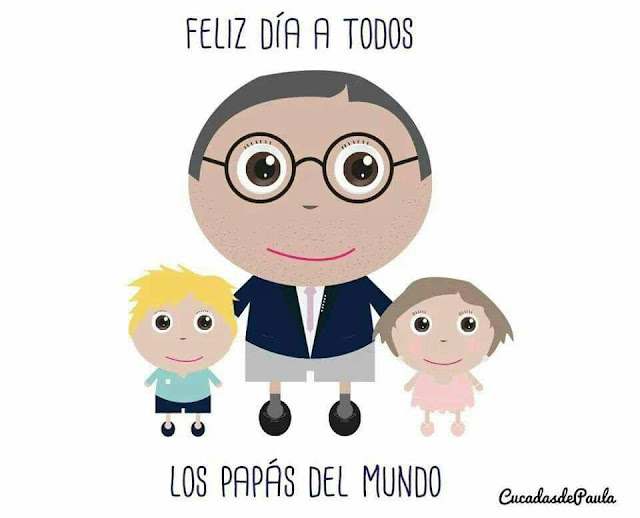 Posted by Keith Willliamson at 11:42 am Labels: comment
0 comments

Nothing beats a live performance.

I know that the band have put in many hours rehearsing for the competition in Villena on the 7th April. However, performing in concert to an audience is the ultimate test and the best preparation.

Our band have already played their programme in a concert on the 3rd March. This is a reciprocal concert in Bigastro.

Unfortunately, Pam and I were in Manchester for the last concert. You can be sure we will not miss this one. 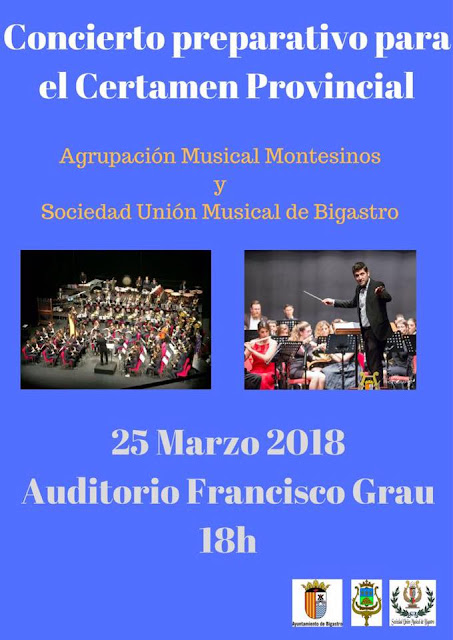 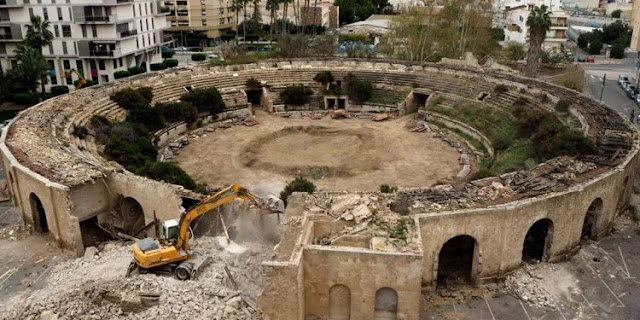 At last, work has begun to demolish a large part of the structure of the old bullring in Orihuela.

The old building will become a multipurpose space with a capacity of up to 2,800 people. The new complex will be host shows, have garden areas, a cafeteria, public baths and an exhibition hall. What it will not do is stage bullfights.

Give them your support 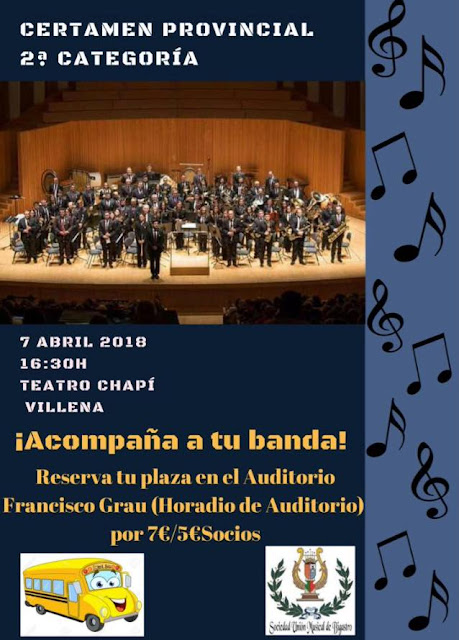 Pam and I will certainly be there to support our band.

The Second Section will take place at the Chapí de Villena Theatre , on Saturday, April 7, starting at 12:00 and the order of action will be as follows:

In the afternoon, the auditions will begin at 4:30 p.m., in the following order:

I don't know about the first band playing but we do know that the band from San Miguel will provide stiff opposition.
Posted by Keith Willliamson at 8:36 am Labels: local news
0 comments

Only 25 of these 'test' cameras were produced by Ernst Leitz in 1923—two years before the first Leica camera was officially brought to market. Of those 25, only three are known to still be in 'original condition.'

If you have one in your loft, let me know and I'll take it off your hands! I don't mind if it not quite as good condition as this.

Christopher Riley has managed to find this photo of him when he played with Johnny Breeze and the Atlantics in Blackpool.

He's also came across a poster of the time when the Atlantics played at Morecambe Pier with Peter Green's Fleetwood Mac as top of the bill. Chris was not with them then.

PS Chris is on the left in the first photo.

And below with two of the other bands Chris played with, The Hobos and The John Evan Band which later became Jethro Tull. 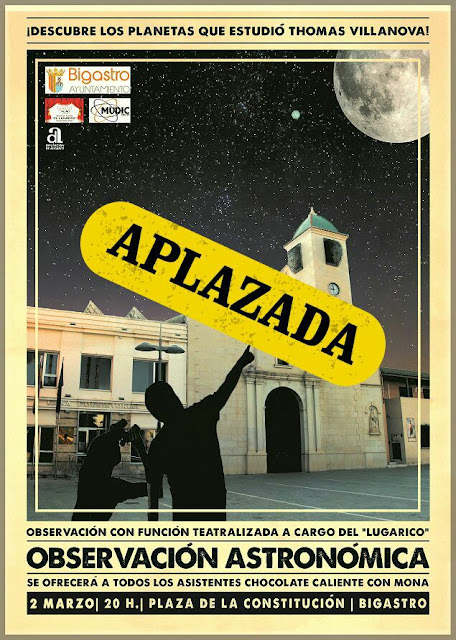 With a heavy covering of clouds, this would be a non-event!
Posted by Keith Willliamson at 1:50 pm Labels: local news
0 comments 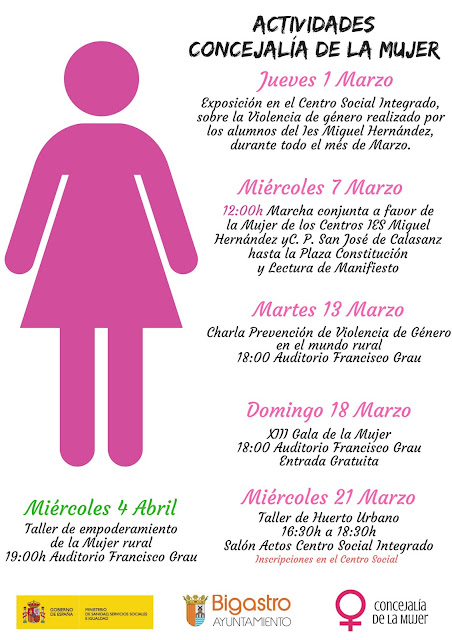 Posted by Keith Willliamson at 8:34 am Labels: local news
0 comments