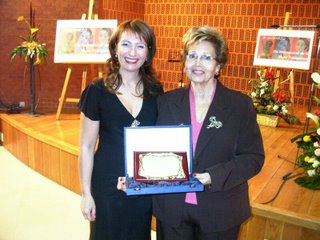 Last weekend Bigastro celebrated the International Day of the Woman Worker. The Council of Woman and the Association of Progressive Women in the town organised special events to mark the event which coincides with the 75th anniversary of the right to vote for women in Spain. At the Social Centre they gave a talk about the role of women in the 20th and 21st centuries and presented Dña. Nugget Ruiz Lorente, a long serving teacher, with this plaque. She accepted it on behalf of all the women of Bigastro who she said looked after a house, a family and in many cases held a job. The following day a special mass was held at the church after which the Association of Progressive Women organised food for everyone.

On Tuesday in our Spanish class the women were each presented with a red carnation. Maybe next week the men will get something for putting up with the women!
Posted by Bigastroandbeyond at 9:46 am