Bigastro's will be protected from pests in the most natural way, with a greater presence of their predators. To achieve this objective, a series of nest boxes are being installed to attract the settlement of a larger population of insectivorous birds that fight pests such as that of the pine processionary. The Bigastro City Council has launched this campaign with the collaboration of the Association of People with Disabilities "La Pedrera", who have produced nest boxes of various sizes.

The first wooden nests have been installed in the trees that are located on the Alquibla Route, in the area of ​​La Pedrera. The councilor for the Environment, Antonio Meseguer, and the environmental technician, Pablo Perales, helped by some users of the association as well as by students from the San José de Calasanz Institute, carefully placed what will be future "homes" for the birds. In addition to processionary, the greater presence of birds will allow controlling the annoying mosquito plague. Meseguer noted that this initiative is part of a project that works on environmental education, and "we are looking for ways to reduce the use of chemical pesticides."

The project arises from an agreement of the City Council with the Ibero-African Biological Studies Society, where through a contribution of 700 euros, manufacturing of nest boxes and talks were held in educational centers in Bigastro. Pablo Perales, in charge of the project, explained that "it is about promoting the nesting of insectivorous species, both in natural areas and in urban settings, especially birds that have suffered a significant decline in recent years, and now it will be treated to make life easier for species such as hoopoe, scops owl, as well as small birds that feed on insects that are a pest.

After placing these boxes, the beginning of colonization will be monitored in June, and then, in March or April 2021, 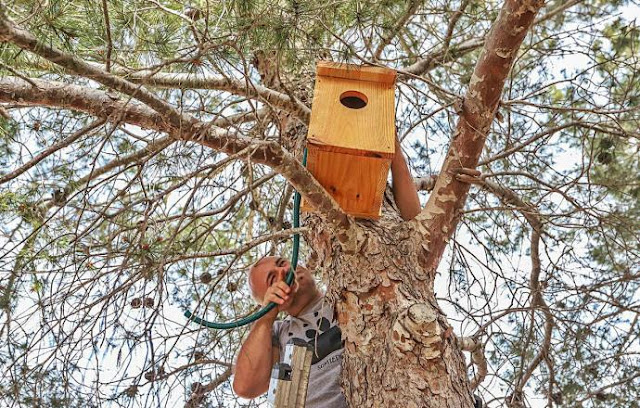 Posted by Bigastroandbeyond at 5:08 pm