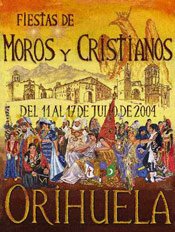 Around the 17th of July Orihuela celebrates the festivity of the Re-conquest. This celebration, - which was first recorded in 1400-, remembers the Christian re-conquest of the city on the 17th of July 1242. The celebrations in 2004 marked the 30th anniversary of the incorporation of the Moors and Christian and so were apparently even more spectacular than usual.

Last year we saw the parade of the Christian groups, this year we will go and see the Moors..
Posted by Bigastroandbeyond at 8:26 am Labels: local news

hi keith, love the blog. do you know if the christians is the 14th and the moors the 15th ?
thanks mel & lilian