This week, work has commenced on this great project that we started 5 years ago. A project that, as we indicated a few days ago, has been the best rated in the Valencian Community and eighth in Spain. With a grant obtained from European Next Generation funds and the Alicante Provincial Council of almost 1,250,000 euros.

The works will last about 4 months and will cover Calles Moreal, Antonio Gálvez, La Acequia, Retirees, 1º de Mayo and San Pascual as well as the entire Huerto del Cura park, which is going to undergo a great change.

The objective set is to improve road safety, accessibility, increase the children's play area, increase the shadow area, improve areas for parking, loading and unloading for commerce, and turning the Huerto del Cura park into a large square where the passage of vehicles will be reduced, achieving a low emission zone.

These works are going to mean an important change, also in the entire street network of the urban area, where, together with the mobility plan, we will see changes in the directions of the streets, beginning with traffic tests in the coming months.

The project will also include the placement of intelligent parcel collection areas for the citizen, reducing the impact of the passage of courier vehicles. Placement of re-vending machines to motivate citizens to recycle and  promote local business with coupons and the creation of a free digital platform for citizens and businesses that will serve as a virtual showcase.

The Council are aware that the works will involve a lot of inconvenience, in addition to continuous street closures. Any urgent need such as removals, the City Council will process all the steps so that they can be carried out.

In the same way, everyone interested in knowing about this project is invited to approach the City Hall to be informed.

PS I do hope we have a re-vending machine at the entrance to La Pedrera. After all, we do seem to fill the bottle bank on a regular basis which might say something about the drinking habits of the residents here! 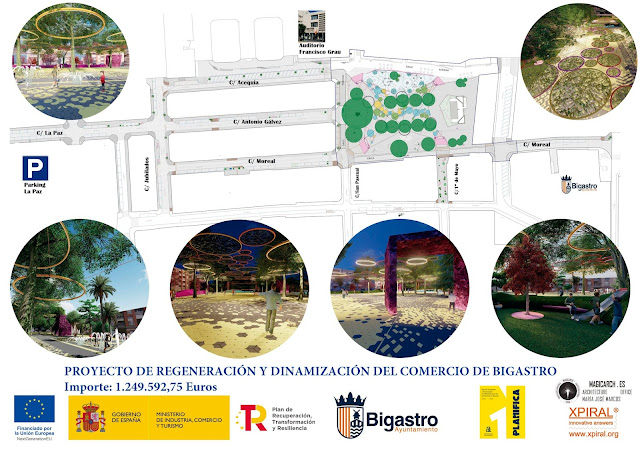 Posted by Bigastroandbeyond at 9:26 am