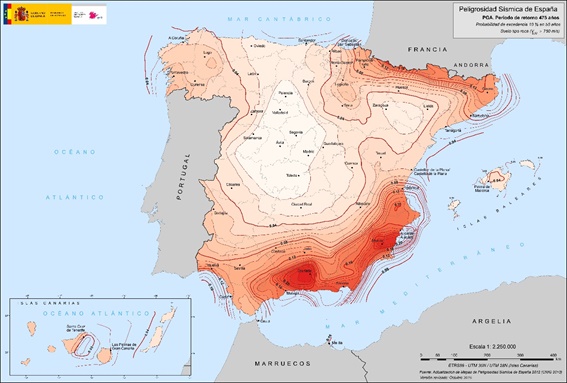 The history of this region has been deeply linked to the occurrence of earthquakes - note the darker colour on the map.

We live in a geologically active area, in constant evolution, the result of the collision between the Eurasian and African plates.

Although the first historical records of seismic activity in the Iberian Peninsula dated back to about a thousand years before our era, it was not until 1048 that the first major earthquake was recorded,

With an estimated intensity of VIII and its epicentre in Orihuela, that earthquake destroyed the major mosque in the city, as well as some buildings of Arab origin in Guardamar and whose ruins are still visible today.

The best known earthquake though was on March 21, 1829.  With its epicentre in Torrevieja that one left almost a thousand  people dead and destroyed thousands of houses.
Posted by Keith Willliamson at 2:53 pm Labels: local news