At the end of the week

One of the least attractive side effects of the Moors and Christian festival in Orihuela is the sight of litter strewn on any open land near the city centre. 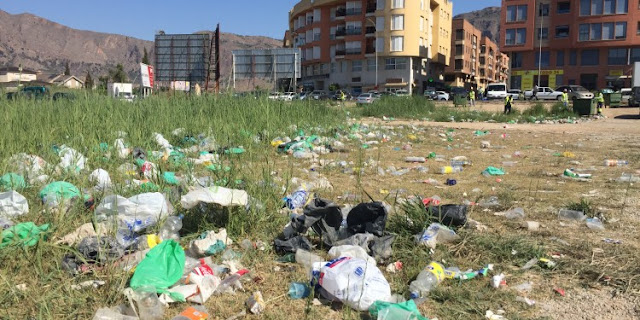 Those of you who have been to watch the parades must have noticed the hordes of young people who congregate afterwards with carrier bags laden with bottles of spirits and soft drink mixers. They are preparing for what is called  macrobotellón, a feature of summers here in Spain.

All efforts to control this activity seem to be in vain. There simply aren't enough policemen to stop the young people from congregating in this way and every year the numbers seem to increase.

The neighbours complain of course because apart from the litter, these meetings are far from quiet and often carry on until the early hours of the morning. Then there is the issue of toilets or lack of them which means that by the morning the locals face the nasty stench of urine outside their houses.

It doesn't just happen in Orihuela nor is it confined to fiestas, this goes on most weekends in many cities and towns.
Posted by Keith Willliamson at 4:39 pm Labels: local news