Any excuse to party 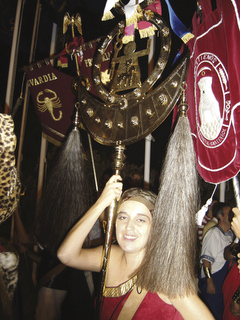 Cartagena goes one better. Not for them a simple Moors and Christians Fiesta, theirs celebrates the Carthaginians and Romans. The events of the fiesta, which is now in its 16th year, are loosely based around events that happened some 2,230 years ago. Hannibal, the great Carthaginian leader had set out from his home of Cartagena to attack Rome with his elephants when the brilliant young Roman general Publius Scipio, junior, attacked and took the city. Around that base of fact, the modern fiesta has a great deal of fun. There are naval landings, ceremonies, night-time oath taking, battles and displays. Of course, plenty of wine and beer is needed to make sure that everything flows smoothly and a large night time camp will be set up, full of ornate tents and stockades erected by the various Carthaginian troops and the Roman legions will be set up next to the football stadium.
Posted by Bigastroandbeyond at 8:34 am Labels: living in Spain, local news

Javea Property dot com, a family run business where our 20 years experience of living and working in Javea combine to bring you a superb range of Javea property for sale including apartments, townhouses, villas and building plots.