A night I shall never forget

Having gone down to the town to take photos of the traditional floral offering to the patron saint, Pam and I returned later for the concert. My task was to capture the event with photos.

Half way through, the President of Sociedad Union de Bigastro made presentations to those musicians who had been highly placed in competitions. I was to the left with my camera trying to capture some of those moments.

After all of the musicians had been suitably rewarded, the presenter announced that they had a special award for someone who had contributed much to the band even though he wasn't a musician. A photographer who was held in high esteem by all. At that point it occurred to me that might be me and then my name was called out.

I had to struggle to find my way from where I was positioned to the front of the stage which took me a good few minutes. The applause continued much to my embarrassment.

The President, Alfonso Banuls Fuente then placed the pin on the collar of my shirt and gave me a second pin to wear. As I thanked him. my good friend and fellow photographer, Jose Jouaquin (better known as FontaBigastro) appeared with his camera to take pictures of me. I gathered that he had come especially for that moment. 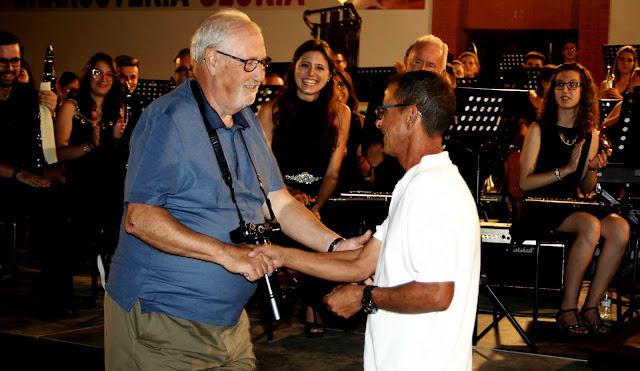 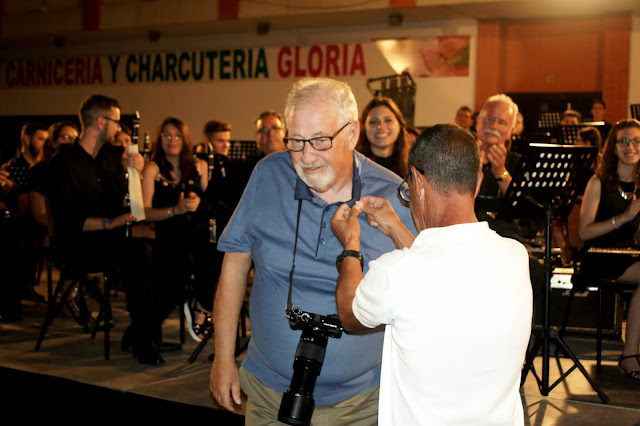 As you can imagine, I was delighted and at the same time very proud. I shall wear my pins as often as I can to demonstrate how much I appreciate the gesture of kindness.

You can see my photos from both the magnificent concert and the floral offering that took place earlier in the evening my visiting the sidebar of this blog.

Posted by Keith Willliamson at 10:31 am Labels: local news

A really wonderful honour Keith. The band must be really appreciative of your contribution and you do a great job for them.