Dangers on the beach

Most people survive a trip to the beach and a paddle in the sea without harm. However, lurking in the sea are some fish that are determined to spoil your day.

This poster informs you about what to do if you get stung by a weaver fish (spider fish) or a jellyfish. 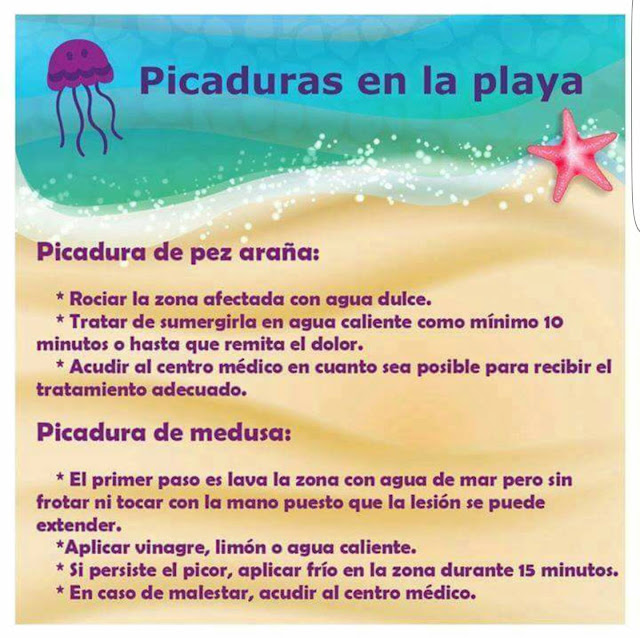 The weaver fish lives in the sand and it is the spikes on its back that are the problem. It is said that they are strong enough to penetrate even a leather boot. They are a defence mechanism that the fish uses if threatened.

The pain of the sting is instant.  Described as burning and crushing, it can spread to involve the entire leg (or arm) from where the puncture occurred. Pain typically peaks at 30 minutes then resolves by 24 hours, but can persists for many days. The puncture site itself can show redness, bruising and warmth over a 6 to 12 hour time period. Swelling can increase in the affected limb for up to a week. Infections are common due to the depth of the puncture and the "dirty" nature of the puncture from murky, sandy or muddy water.

Jellyfish, on the other hand float in the water and it is their long tentacles that contain the venom. In this case the fish uses the sting to stun prey.

Most jellyfish stings are mild and don't require treatment, or you can treat them yourself. Don't use vinegar or alcohol to wash the affected area, as it can make the pain worse and ignore any advice you may have heard about urinating on the sting. It's unlikely to help.
Posted by Keith Willliamson at 8:11 am Labels: local news