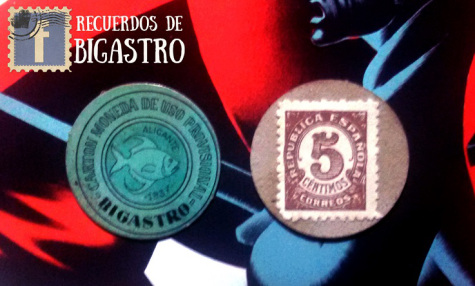 During the Spanish Civil War, lack of currency was a real problem. In fear of what might happen, many neighbours tried to hoard in their houses all the coins and bills they had to hand. For this reason today it is not strange to find in old or abandoned houses, coins, stamps or bills of this time hidden between walls, false ceilings or holes in the floor.

This caused a considerable reduction of the money in circulation, to the point that it was necessary to produce alternative currencies to respond to the demand.

In the Republican area metal was scarce, since the regions where the main metal productions were located were in the national zone, so the decision was made to issue cardboard coins.

The cardboard coins had a picture on the obverse that made reference to the province to which they belonged ( in our case a fish following the fishing trade of the province). Alongside the picture, there was the name of the place -Bigastro- and a slogan "Cardboard coin of provisional use". On the back was a postage stamp with the value of the cardboard coin.

Like all coins and notes, these had many counterfeits, and the coins were produced with such inexpensive materials (stamps, paper, cardboard ...) that the security measures that prevented their falsification were practically non-existent. Today it is very difficult, if not impossible, to certify if one of those cardboard coins is authentic or not.

NB 5 centimos is 5/100ths of a peseta. In 2002, Spain changed its official currency from the Peseta to the Euro. Anyone with Pesetas could exchange them for Euros at rate of 166.386 Pesetas to one Euro. This coin was therefore worth 0.05 of a peseta which was worth 0.006 of a Euro in 2002 in other words 3 millionths of a Euro.
Posted by Keith Willliamson at 11:50 am Labels: local news