My interview with Pascual Segura 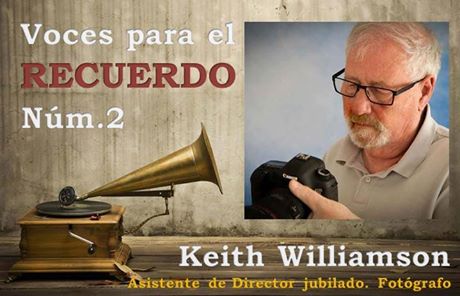 Keith Williamson: "I hope that in the future my photos will help people remember the current Bigastro"

Posted on 05/17/2017 by Pascual Segura
Every documentalist, researcher or passionate of a place knows, that there is no more seductive and faithful chronicle than that of the foreign traveler. Centuries ago hundreds of outsiders such as Richard Ford, Lady Holland, Charles Rochfort or George Borrow visited our country in search of knowledge, social uses or simply an exotic land such as ours, where we could experience adventure that would break into a thousand pieces The rigid mold of his daily life.
The legacy they left on their way through our country was substantial and transcendent. And is that if a villager may be unable to rant to his village, the traveler who comes from outside does not. In this way his chronicles full of details and criticism are highly valued, because in most cases they tell the truth.
Bigastro is fortunate to have a traveler. An English traveler who for years has immortalized our day to day with his camera. Thousands of snapshots that speak of your band, your San Joaquin, your Lady Virgin of Bethlehem, you, your people, your street, your town. After a while there will be no one left now, neither you nor I, our children will remain. And when their footsteps are lost in the backstreets of the older Bigastro they will wonder ... how did everything happen? Then they will not be orphans of history, because they will have the photographic chronicle of an English traveler that years ago, perhaps centuries, dedicated part of his life to portray us as we were, as we are, and I hope that for many years, as we will be . A wonderful legacy, immortalized in time, and only in exchange for the beautiful gesture that provokes his photographs, a smile. Worth from my little blog my greatest gratitude. Thank you for your work, my friend, Keith Williamson.

Keith Williamson. Retired Director's Assistant. Photographer
Pascual Segura: In a moment of your life you decide to come to live to Bigastro. When does that moment happen and why?
Keith Williamson: After our retirement we intended to move to another country and face new challenges. Since we had enjoyed many visits to Spain, this was the logical choice. Bigastro offered us a life in Spain far from Britain. We found a city in which we could integrate and learn Spanish, besides knowing the authentic Spanish customs.
PS: Although you live many years in our country, which is already yours too, you must keep many memories of your city of origin. What was your city ?, and your profession?
KW : I was born in Manchester, I lived in Yorkshire and then in Canada. I returned to Yorkshire, and finally I lived in Wirral. I started my career as an art teacher at a Liverpool high school. I promoted to Head of the Art Department and, finally, Deputy Head in charge of Local Finance and Administration.
PS: We all recognize you next to your inseparable camera. When does your passion for photography arise?
KW: I had my first camera at the age of 11. Then I would buy my first "serious" camera while I was in college. Since then I have had many cameras, the new one always more expensive than the previous one!
PS: Your work with the camera has generated a great photographic legacy. Do you know how many pictures you've made? How much time do you dedicate to this hobby?
KW: At my house I have thousands of photographs and slides in movies. I also have movie reels I took when my kids were young. Now I have an online Flickr account with 6,500 photos that have been viewed more than three million times, and a photo archive stored on hard disks with more than 100,000 digital images along with many hours of digital video.
My wife says I spend all my time in my hobby !. I usually spend two or three hours each day working on my photographs. For every hour I spend taking photographs, I need at least four hours of work to process them on the computer and publish them on the internet.
PS: For many years you have photographed the performances of the Bigastro Music Union. What is your opinion about the musician's tradition?
KW: Bigastro's musical tradition is fundamental to the history and culture of the city. It is the base on which it is built. There is still a great musical tradition in England, but the formation of local bands no longer exists. In the north of England there were many metal bands created by factory workers - especially coal mines - who were acclaimed internationally. Bigastro's band reminds me a lot of that old British pride.
PS: The old street of the village or the use of its garden invite us to think that we live in an ancient place. What do you know about Bigastro's story?
KW: I know a little about the history of the city thanks to your excellent website, but I would like to know much more. The differences between the history of Bigastro and the towns in which I lived fascinated me.
PS: Of its streets, squares, recreational spaces or natural areas. What place of Bigastro would you highlight?
KW: I especially like the area of ​​La Pedrera for its natural beauty and the garden, which reminds me of the horticulture of the villages where I grew up. For me the green spaces in the cities are very important, and that's why I like gardens and playgrounds. Of course, the Auditorium is a great asset to the city, it is a place where we have enjoyed many concerts and other events. Did you know that, my wife and I act on stage for the children of the local schools? We were in two productions organized by the School of Adult Education. We were also involved in a production at the Integrated Social Center and for several years we sang carols to children in local schools before Christmas.
PS: Bigastro is a place where ancient traditions endure to which, over time, new ones have been incorporated. What tradition or cultural aspect would you highlight?
KW: Apart from its musical tradition, I enjoy its religious celebrations, like the Encounter and Corpus Christi and of course the parties, games and other celebrations.
PS: The Bigastro of today must be a little different than the one you saw for the first time. What do you think has improved? What has been neglected?
KW: When we first arrived our impression was that the city was scruffy in some parts and elegant in others. Although much work remains to be done, much progress has been made to improve the city. There are more beautiful cities to live in, but surely there is none as friendly, welcoming and proud as Bigastro.
PS: If a friend from your country asks you to define Bigastro by helping only three words. What three words would you use?
KW : Friendly, traditional and quiet. Pascual, although it is important that Bigastro seeks to progress towards the future, it is vital that he remember his past. I hope that in the future my photos will help people remember the current Bigastro. More importantly, I hope people will enjoy my work. Thanks for your time.
Posted by Keith Willliamson at 1:56 pm Labels: local news

Rocket Spanish: The Award Winning Product That Gets You Speaking Spanish & Loving the Spanish Culture.

(And the best thing is - it only takes minutes a day)