One in a million 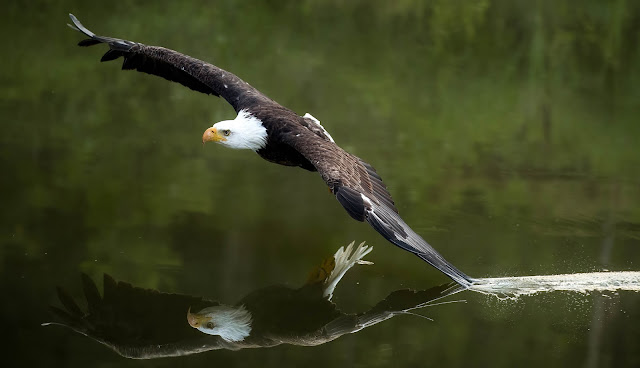 Birds in flight is a specialised form of photography that requires lots of patience, being in the right location and having the right equipment (think long and expensive lenses). I do admire those who go in for this type of work but to be honest, the results are often not that interesting to me.

This photo on Flickr of a bald American eagle though impresses me a lot. Apart from the skill and patience, the photographer had luck on his side. The water was still so he got a perfect reflection, the light was just right to capture detail in the bird and the eagle obliged by trailing its wing in the water.

I imagine that the photographer took a burst of shots and selected this as the best. The result could well win awards - I would certainly vote for it.

Now 200mm is very much on the short side for this type of work. Most bird in flight photographers would be armed with anything from 300mm to 600mm lenses even on crop framed cameras. However, as Carol Thorpe would point out, the D750 is a full frame 24 megapixel camera and so it is likely that the end result is a crop from the original
Posted by Keith Willliamson at 10:08 am Labels: photographs

The most salient point you make here Keith is the luck involved. For shots like this even first rate kit, profound skill and infinite patience isn't enough. It's a bit like super successful athletes. Skill and hard work only get you so far. With bad luck you never make it.