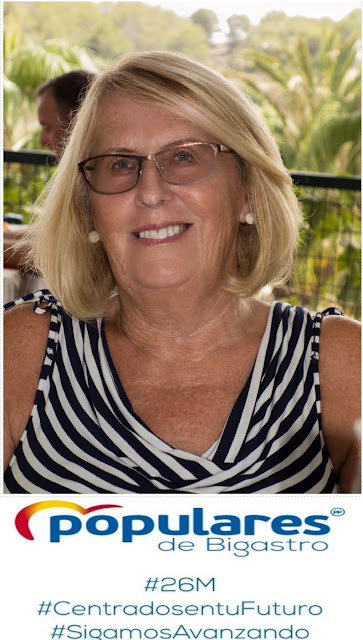 Together with my husband Keith, I have been resident in Bigastro for nearly 15 years.

My family in England consists of my daughter Jemma, my daughter Laura and son-in-law David plus grandchildren Molly and Rory.

Before retiring to Spain, I worked in Education as a teacher from 1969 – 2004. Previously at College, I studied Education and specialised in English/Drama and French language and Literature.

I believe that I am friendly, enthusiastic and outgoing. I love to chat to the people in Bigastro and attend many of the Cultural Events on offer.

I have also been able to help local students with their English Language Studies. I feel very proud of the progress they made.

It has been an honour for me to be invited to join the Partido Popular.

My life here in Bigastro has been enriched by the friendly people and their Traditions. In return, I would like to offer my help and support to the community as a whole.


And this is my translation of the presentation of Pamela to the public by the Mayor:


I present Pam Williamson , although it is not necessary, because you all know her.
We have been seeing Pam and Keith Williamson for many years in our town. Always kind and participating. So much so, that Keith, along with Fonta Biagastro, has become our official photographer of the cultural and social activities that take place in # Bigastro .

I remember the day that they were proposed to participate as Kings of the Third Age of the Patron Saint Festivities of San Joaquín 2017.

They did not hesitate for a moment. They reacted how any of the retirees born in Bigastro would have done because they won our hearts and we won theirs.

I asked Pam to be part of the political project of Populares Bigastro because she loyally represents her British compatriots who both live in Bigastro and enrich it culturally. The British are a community very active and committed to the town and their neighbours. They deserve to be represented in our town hall in the figure of Pam.

I invite all the host bigastrenses to participate in the political life of our municipality, if they wish, as Pam has done.
As many times I have expressed in my speeches, "Bigastrense is not only the one who was born in Bigastro, but everyone who comes to live with us in peace and harmony."
Posted by Keith Willliamson at 7:51 am Labels: local news