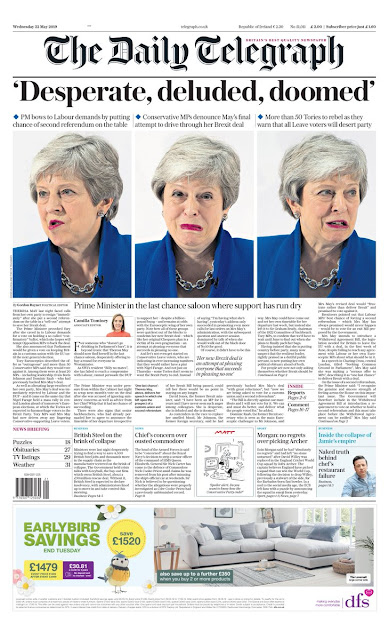 The day after Teresa May tells of the changes she has made to try and win votes for her Brexit plan, most of the British newspapers have savaged her.

One of the most Tory newspapers out there leads the pack with this front page story entitled, Desperate, deluded, doomed.

Just to reinforce the point, they have included three images which I am certain Mrs May would prefer them not to publish.

I am no fan of Teresa May but I think that this is just a tad cruel. Imagine the lady's reaction when she sees this.

PS In their reaction to this new proposal. some MPs have chosen colourful expressions. The best I have read came from Green MP Caroline Lucas  who said Ms May had done no more than “put lipstick on a pig”.
Posted by Keith Willliamson at 9:57 am Labels: comment