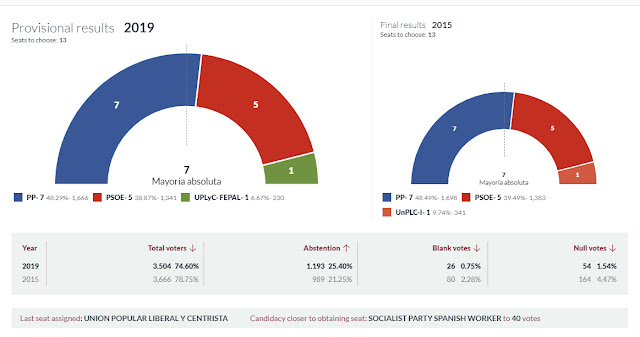 Yesterday, the PP held on to their 7 seats with 48.29 % of the vote. The total number of votes was down to 3,504  which represented 74.49% of those eligible to vote. As the caption says, 40 more votes for the PSOE would have given them the seat awarded to the Liberal coalition.

Looking at it another way; in 2007 the PP got 1,525 votes, yesterday they got 1,666 - just 142 more but that was enough to give them 2 more seats than they had in 2007, On the other hand the Socialists were only given 1,341 votes yesterday which was 955 less than they got in 2007 losing them 3 seats. Possibly,  some of those that once voted for the PSOE have changed their allegiance to the PP but also many may have stopped voting hence the reduced turnout.

Looking at the country as a whole we see that the total number of voters increased and the abstention rate fell from 4 years ago. We can also see that the PSOE were the winners overall. However they lost out in the "jewel in the crown", Madrid and the Madrid region.
Posted by Keith Willliamson at 8:57 am Labels: local news