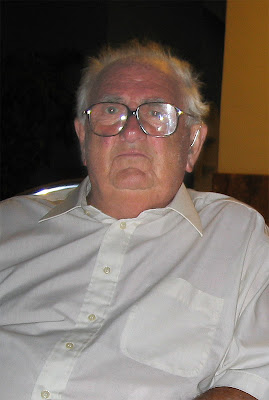 In a previous post I had said that my Father was in a Short Term Care Centre near Barnsley. His mobility had improved and he was warm and comfortable. We were happy that this would be better for him than staying in the cold house he had in Cawthorne.

Sadly the improvement was short lived. His mobility worsened, he was losing weight and complaining of backache. Recent tests at Barnsley General Hospital showed that the backache was caused by a tumour on one of his kidneys which they thought was cancerous. My brother Brian has visited him each day and was able to observe the rapid deterioration in his health, especially during the last week.

Yesterday they took Father back to Barnsley General Hospital because he had a chest infection. Upon examination they found that the cancer in his kidney had spread to his lungs. Sadly this morning he died peacefully. We are pleased that he did not suffer and that his end was quick and painless.

He had made it clear that he didn't want to be at the Centre nor could he stay in his house. For him passing away was the best alternative.

Father was a well respected person, loved by all who knew him. He had a great sense of humour and a very caring nature. We will miss him a lot and always be grateful for all that he taught us. He his now reunited with my Mother who he had missed since her death over fifteen years ago.

Pam and I are flying to England tomorrow and will be there for about a week. So if there are no posts for awhile you will understand the reason.