Let them eat cake but not at these prices! 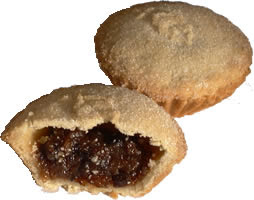 As we've said before; not everything in Spain is cheap especially anything which is imported from England.

Christmas would not be the same without,turkey,Christmas cake, mince pies etc. but these things can come at a price here in Spain. Pam brought as much as she could carry when she came back in October but couldn't manage to fit in any mince pies.

When we were in Carrefour last week, we spotted Mr Kipling's packs of 6 mince pies along with another brand again in packs of six. We had to look twice at the price though - 9,90€ for the Mr Kipling's and 7,90€ for the others. Imagine paying the equivalent of £6.73 for six mince pies in England. I don't suppose the Beckham's would even pay that price. Christmas cakes were just as bad at 20€ for the smallest cake you can imagine and tiny Christmas puds at over 6€ each.

Fortunately we have found a source of mince pies in Spain at a much more reasonable 1,95€ for 4. So we will still be able to enjoy some traditional Christmas fare without having to take out a mortgage first.
Posted by Bigastroandbeyond at 6:21 pm Labels: living in Spain, personal

Sounds likes it's time to start exercising your kitchen muscles. Can you get the ingredients over there and make your own? At those prices make your own and sell them!!

Now there's the rub - the mincemeat is imported from England!