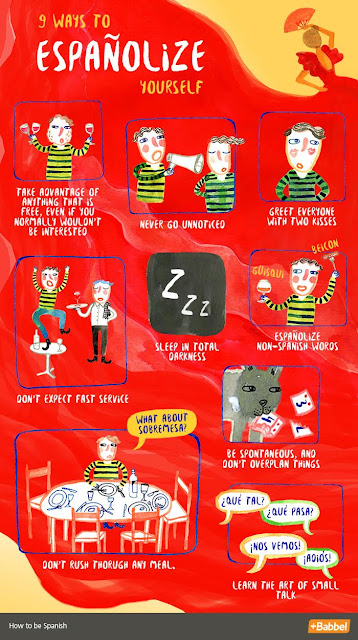 It isn't just about learning the language, you come to accept that a party next door will prevent you from hearing the television or getting to sleep at a normal hour. Getting used to fireworks going off at any time of day for the slightest excuse is only part of the process. There is a lot more to it than that.

This poster highlights some of the ways in which you can become more Spanish.

Another example - if you meet someone you know in the street and they greet you with "adios", that means they don't have time to stop and talk. Generally though they will have time and will engage you in conversation. In summer it will usually start with "hace calor", in winter it will be "que frio". Once you have the weather out of the way, the chat can move onto anything and everything.

The amusing one here is the idea that service is never quick. Go to a bar and try and catch the waiter's eye - it is impossible to do so until he or she is ready. They have noticed you, it is just that they are busy doing something else. Once they are ready, they will come over to serve you.

The next issue is paying. Unlike bars in Britain, you will very rarely be expected to pay for anything until you are ready to leave. Even then you may have to press the waiter to get a bill.

The main thing is to never expect anything other than mass to start on time. If it says 10:30 in the programme, then it will likely be 11:00 or later. The same applies to medical appointments which are always much later than scheduled.