The nasty side of migration

My friend, Scout John, sent me an email with an account by a Polish travel blogger of his experience on the border between Italy and Austria.

The blogger describes the immigrants that he saw on the roadside as "savages". His account goes on to explain that they surrounded the car of an elderly Italian woman, dragged her out by her hair and tried to drive off. His own bus was attacked as they tried to get the driver to open the door. They were throwing faeces at it and spitting on the windscreen.

The cars that arrived with humanitarian aid were turned over and a French coach was looted even as they were being told that they had permission to cross into Austria. Like we have seen in so many of the photos in newspapers, the migrants were mainly aggressive young men with very few women and children.

This photo shows the debris that the migrants left behind on the roadside. 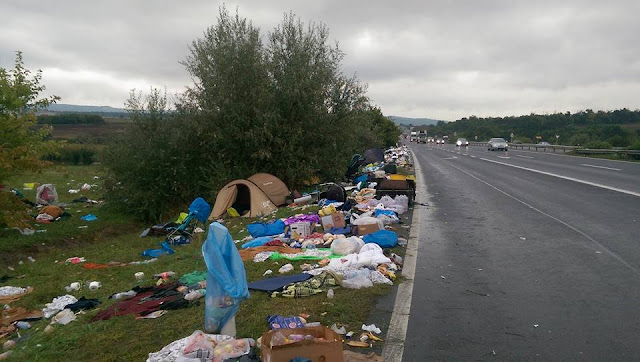 Tensions amongst those who are trying to escape from war torn countries are running high as country after country refuses to accept them across their borders. It is understandable that they are frustrated but  I am sorry, the type of behaviour that this blogger observed is hardly likely to endear them to those countries willing to help.